I’m Marco, an Italian that has lived in England (Cambridge to be precise) since 2008. When I lived in Italy, I had a cooking blog in Italian. After moving here, I didn’t care enough to blog in Italian about the food I cooked and that often included ingredients that are difficult to find in Italy. Taking pictures for my recipes was also getting boring.

Now I live in a flat with a nice new kitchen and I have a phone that takes better pictures than the ones you could take with most cheap digital cameras from a few years ago, so I decided to try again with a cooking blog. I decided to write for people who live in my same country, so I will try to use mostly ingredients that can be easily found here. I’m also going to assume that you have a scales (measuring with cups and spoons is not precise enough for most recipes) and use measurement units that are used in the UK (sorry, no Fahrenheit or other American things).

Here’s a picture of me, eating of course: 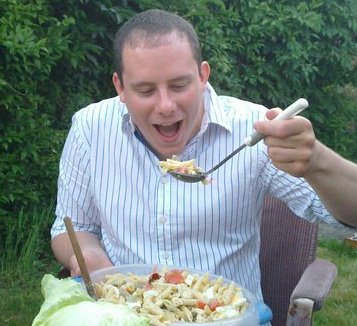 Most of the recipes on this blog are Italian, so it’s useful to explain the typical structure of an Italian meal. In most of the world a normal everyday meal is composed by a main course plus some side dishes, and sometimes a starter and a dessert. In Italy everyday meals are usually composed by two smaller main courses, a primo (first course) and a secondo (second course).
Having two separate courses means that most dishes can be quite simple and it’s common to have dishes that don’t contain vegetables or don’t contain any meat, as there will be another course. This structure is so common in Italy that also non-Italian restaurants in Italy have to split their menus in separate courses, for instance a noodle dish in a Chinese restaurant would be considered a primo.

Primi could be a soup, pastas or risottos and they are served by themselves without any side dish. Secondi are often some kind of meat served with a salad or some other vegetables. Pasta and rice are never served as a side dish. Some richer dishes can be eaten as a single main course and they are called piatti unici.

Special occasions, like Christmas meals, tend to be much richer and involve many courses. Wikipedia has some more details on the various courses.