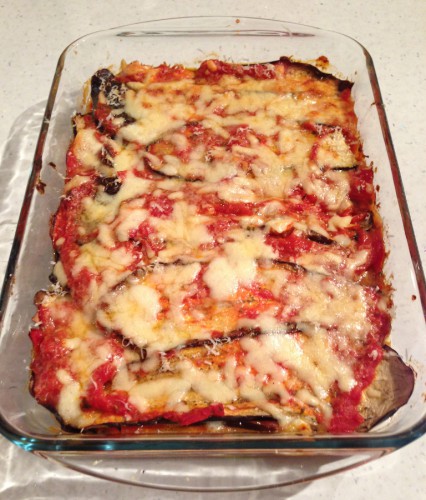 Aubergine parmigiana is a traditional dish from Southern Italy (it’s not clear if it’s from Naples or from Sicily), made with layers of aubergines, tomato sauce and cheese.
Traditionally the aubergines are deep fried, but I prefer a quicker (and lighter) version with oven cooked aubergines.
For this recipe you need to use real mozzarella; the one that comes shaped balls and is packed with water to keep it fresh and moist.

Serves 4 as a main course, 6 as a second course or starter.

In the meantime, heat up a couple of tablespoons of olive oil in a pan with the finely chopped garlic. When it starts sizzling, add the tomatoes, the shredded basil, some salt and some pepper. Bring back to a boil and cook uncovered (or partially covered to avoid splatters) for 25 to 30 minutes, until quite thick.

When the aubergines and the sauce are both ready, you can start assembling the dish. First of all, drain the mozzarella balls and chop them in small pieces.
Spread a couple of spoons of the sauce on the bottom of an oven safe rectangular dish (I use a 35x23cm pyrex dish).
Cover with a layer of aubergines; you should use about a third.
Spread one third of the tomato sauce on the aubergines and cover with one third of the mozzarella.
Repeat for other two layers. If you used a differently sized tray you could end up with more or fewer layers, but it doesn’t matter for the final result.
Spread the grated Parmigiano cheese on top of the dish.

You can now bake the parmigiana or keep it in the fridge until needed; it will last for a couple of days.

Bake the parmigiana in a preheated oven at 180 °C for 30 minutes. Leftovers can be reheat in the oven for 20 minutes or in a microwave until hot.

One thought on “Aubergine parmigiana”