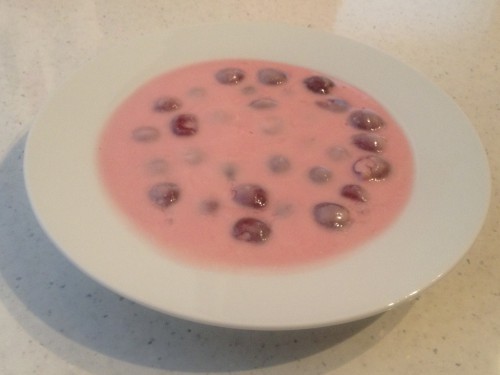 Hideg meggyleves (cold cherry soup) is an unusual, but very good, Hungarian soup; despite containing cherries and sugar, it’s normally eaten as a proper soup and not as a dessert.
Usually the soup is prepared with sour cherries, but fresh ones are not easy to find in England, so you can just use normal cherries (that are also quite cheap at this time of the year).
If you prefer, you can use fresh, frozen or canned sour cherries, but check they don’t contain extra sugar. If using sour cherries you should use 150g of sugar.

Wash the cherries and pit them. Put the pitted cherries in a pot with 1.4 litres of cold water, the sugar, the cinnamon and a pinch of salt.
Bring to a boil, reduce heat to medium-low and simmer for about 15 minutes, until the cherries are soft but not falling apart. Remove the cinnamon sticks.

Cover the soup and let it cool down a bit. When warm, put in the fridge until cold and thick (it will take at least a couple of hours).