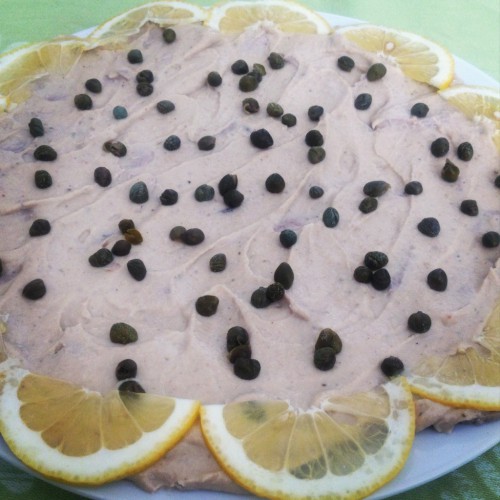 Vitello tonnato, literally “tunnied veal”, is a typical summer dish from Piedmont (the region where Turin is) that is usually eaten as a second course or as a starter. The typical version of this dish is composed by thin slices of veal covered with a tuna-based creamy sauce. Considering that veal is expensive and difficult to find, I prefer to use pork fillet as it produces a very similar result for a fraction of the cost (and it’s also much quicker to cook).
This dish must be prepared at least one day in advance because the flavours need time to blend together.

Ingredients for the meat:

Ingredients for the sauce:

Serves 6 as a starter, 4 as a second course.

Peel and quarter the onion. Clean both the carrot and the celery, and chop them in a few big pieces.
Put all the ingredients for cooking the meat, except for the meat itself, in a pan with enough water to cover the pork. Bring the water to a boil and let it simmer for 15 minutes. Add the pork fillet to the boiling water and let it simmer for 20 minutes. It’s important that the water is just simmering or the pork will get tough.

After 20 minutes remove from the heat and let the pork cool down inside the broth. It should take at least one hour.

While the meat is cooling, you can start preparing the sauce. Place the whole eggs in a small pan, cover with room temperature or cold water and bring to a boil. When the water starts boiling cook the eggs for about 8 minutes. Cool down under running cold water and peel them.

Break the bread into a few pieces and put it in a bowl together with the vinegar. After a few minutes place the bread, the roughly chopped eggs, the capers, the drained tuna, the anchovies, a few drops of Worcestershire sauce and some ground black pepper in a blender. Add about 100g of the broth where the meat was cooked.
Blend the mixture until smooth. The end result should be a smooth and creamy sauce that is more liquid than mayonnaise, but not too runny. The sauce will probably be still too thick at this stage, so add more broth until you get the expected result. Season with salt and black pepper to taste.

Remove the pork fillet from the broth and pat it dry with some kitchen towels. Slice the pork fillet thinly and place in a big enough plate so that the slices cover the plate completely but overlapping as little as possible. Cover the meat uniformly with the sauce. If you want, you can decorate the dish with capers and lemon slices.

Refrigerate for at least one day before serving.